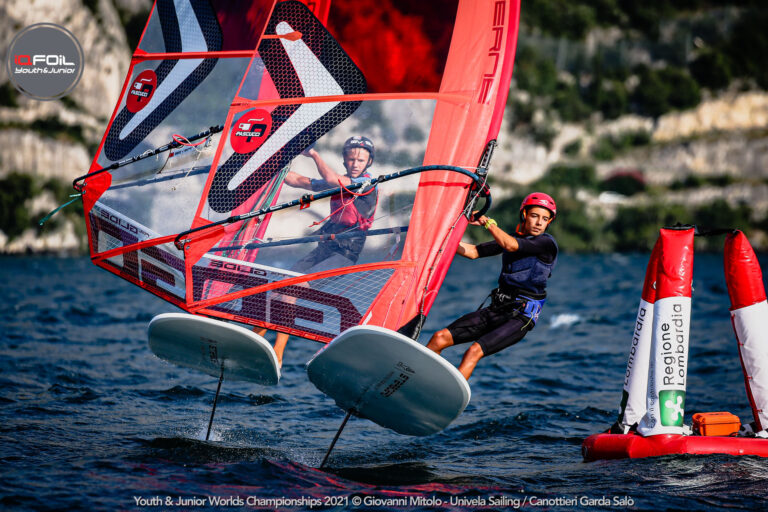 THE FIRST IQFOIL YOUTH AND JUNIOR WORLD CHAMPIONSHIPS COME TO A HAPPY END IN GARDA.

A total of 14 Races in the iQFOiL Youth men fleet, 13 Races in the iQFOiL Women Youth and Boy Junior Fleet, and 11 Races in the Junior iQFOiL women fleet were completed. The first-ever youth and junior iQFOiL World Champions were crowned without the medal race on the final day, but with lots of happy and exhausted young racers stoked on foil racing after five action-packed days here on Lake Garda.

241 Young racers battled it out on course and slalom racecourses and displayed that this new foiling generation is ready for high-speed windsurfing action of the finest! While many of the youth riders are already training on the senior equipment and against the senior fleet, the 100 sets of youth equipment available for charter at this Regatta allowed each of these riders to show their level amongst peers of their age. With a forecast for only wind in the morning on the final day, the decision was taken to allow everyone to race more instead of making the medal race for just the top 12. So the final ranking of the event is based on the results from all the races run throughout the week.

ONCE AGAIN, TEAM FRANCE SHOWED THEIR DOMINANCE IN WINDSURFING BY WINNING 3 OUT OF 4 GOLD MEDALS!

The French duo Manon Piannazza and Gaspard Carfantan are the first-ever iQFOiL Youth World Champions, and Tamar Steinberg (ISR) and Elliot Ponce- Baranski (FRA) become Junior World Champions here in Garda. The youth winners were awarded a brand new iQFOiL 95 board to facilitate their transition to the senior class, while the junior winners were awarded an iQFOil 85 board. But let’s take a closer look at our top fives

During the iQFOiL Games in Campione earlier this year, Manon Piannazza had already shown her immense potential by finishing 6th in the Senior fleet and 2nd U21. After backing that up now with an impressive display here at the youth worlds this week, it seems clear that we will be hearing more from this talented young lady, who also won a silver medal at the Youth Olympics in Buenos Aires in 2018 when she was only 15 years old.

Local Girl Sofia Renna also showed that windsurfing runs deep through her veins and that she will be one to watch in the future. Sofia comes from a family of windsurfers with her older brothers Riccardo and Nicolo competing in the iQFOiL Class while her Dad runs the Vasco Renne Windsurfing Center in Torbole. This week, Sofia used her home spot knowledge to comfortably secure the silver medal ahead of Mika Kafri from Israel. The Top 5 is completed by Marion Couturier from France, who takes 4th and Lucy Kenyon from Great Britain in 5th.

Gaspard Carfantan made his debut onto the international iQFOiL regatta scene, one to remember with a dominant display of first-place finishes throughout the week. While it might have been his first international iQFOiL Regatta, Gaspard is already Vice-European Champion and won a bronze medal at the Bic Techno World Championships in 2017. It looks like his racing skills have easily transferred onto foiling. We are curious to see more of Gaspard in the future.Places 2 and 3 of the Men’s Youth Fleet go to Spanish riders Nacho Baltasar Summers and Bernat Tomas. These two boys are friends who are often training together in Mallorca. Not only do they have favourable weather conditions at their home spot all year round, we also found out that they are racing not only with their peers but also against both their parents on the weekends! With their families equally infected with the foiling virus, we expect to see more from them in the future.Place 4 goes to Duncan Monaghan from Great Britain, and Hidde Van Der Meer from Holland completes the top 5. Not only did Hidde impress with his performance on the water, but he also did a great job at sharing some of the behind the scenes footage over the Starboard Windsurfing Instagram Channel. Thanks, and congrats Hidde!

View The Full Results of Men (U19) Here

In the Junior Women fleet, Tamar Steinberg from Isreal showed she was racing in a league of her own as she won all of the races this week. Israel is the only other nation that could get one of the first highly anticipated Junior World Championship Gold medals. After her great performance this week, we can’t wait to see more of Tamar!

Tuva Oppedal from Norway was able to win a silver Medal after a week of super consistent top 5 results. Tuva was coached by her older sister Helle Oppedal who also competes in the iQFOiL class and won the PWA Foil Slalom event in Israel last month. Guess what? Their other two younger sisters are also already foiling, so if sibling rivalry is anything to go by, you can be sure to see more of the Oppedal sisters in the future! Linda Oprandi from Italy takes the Bronze Medal ahead of Maria Rudowicz from Poland, who is still U15! Maya Gisler also from Norway completes the top 5.

View The Full Results Of The Junior Girls Here

In the Junior boys division, Elliot Ponce-Baranski won the 3rd Gold Medal for France at this event in style by leading from start till finish. However, it was not without a good fight against Italian youngster Federico Pilloni who managed to secure five race wins and showed super consistent results all week.Vidar Nystrom will take home the Bronze Medal to Sweden, and will be sure to inspire his friends back home with this impressive performance. Places 4 and 5 go yet again to France with Clement Picquet and Tom Nicolle, demonstrating that the pool of talented young French riders is as big as ever!

View The Full Results Of Junior Boys (U17) Here

WHAT AN EVENT 63 junior boys, 29 junior girls, 35 youth women and 114 youth men took part in the first official Junior and Youth iQFOiL Championships.If these numbers are anything to judge by what the future might look like, we can’t wait to see what the next championship in a hopefully covid free world will look like. We congratulate all the winners and brave youngsters who faced Garda’s strong northerly morning winds for this very first iQFOiL Junior and Youth World Championships and look forwards to seeing many of you again next year!

What an amazing experience this last week! The wind played some tricks on us but we managed to do a lot of racing in the end. The atmosphere was great and the level was crazy high. The junior fleet was very diverse on level and ages, from young William Preiss from Latvia at only 11 years already having some good races into Elliot Ponce-Baranski from France on the other end winning the event in a solid form, ready to move into the U19.

The winners from the U19 showed that their level is really high and that they can move into the senior fleet with the right skills and to be honest I believe they can have great results there as well. It was very gratifying to see that we have developed a great pathway class for the iQ Senior and that all the ‘kids’ will be ready to challenge the seniors at a much earlier time in their future Olympic careers.

Do you want to see all the amazing photo’s of our young sailors taken during this week? Make sure to visit iQFOiL Youth and Junior Facebook Page:iQFOiL Junior and Youth Facebook Page

Interested to find out more about the iQFOil Youth and Junior Equipment? Check it Out Here